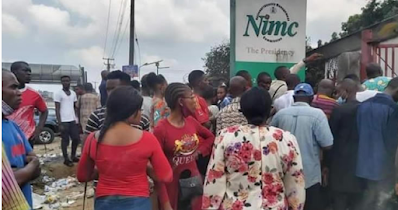 The Nigerian Communications Commission on Wednesday said it was awaiting the advice of the Federal Government as regards the deadline for the integration of Subscriber Identification Modules with valid National Identity Numbers.

It also stated that the earlier announced deadlines were still in force despite the clamour for extension or outright suspension of the registration process.

Calls for deadline extension were mainly due to the large crowds that gather daily at the various offices of the National Identity Management Commission.

The Director, Public Affairs, NCC, Ikechukwu Adinde, told our correspondent in Abuja that no deadline extension had been approved.

He said, “Right now, apart from the recent information that we made concerning the extension, no further update yet.

“The information on this matter was the one that talked about when we moved the extension to January 19 for those who have NINs and February 9 for those who do not have.”

When probed further on whether there had been moves to either extend or suspend the exercise, Adinde replied, “No, no, no; if you follow the opinion of the public, it is in favour of extending it.

“And then, of course, recently there have been concerns on the effect of COVID-19 and all that. But I am sure government is listening and once we are advised, we will go to the press and announce the new position.

“However, as it is now, we are waiting to see what happens at the end of the day, as the recent deadline extension still stands.”

The Federal Government had declared on December 15, 2020 that after December 30, 2020, all SIMs that were not registered with valid NINs on the network of telecommunications companies would be blocked.

It later extended the December 30, 2020 deadline following widespread opposition against the earlier announcement and gave three weeks’ extension for subscribers with NIN from December 30, 2020 to January 19, 2021.