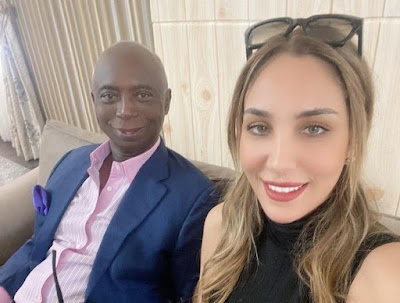 Ned Nwoko, a Nigerian lawyer turned politician, has taken to social media to celebrate Laila Charani, his Moroccan wife, ahead of her 30th birthday.

In the post, Nwoko said it has been a blissful ride over the last ten years with the Morrocan while also hailing her maturity.

“Laila will be 30 years in a few days time. It feels like yesterday. It has been ten beautiful years. Amazing how she has matured over the years,” he wrote.

The billionaire, who is also married to Regina Daniels, a Nollywood actress, has continued to make the headlines in recent times over rumoured attempts to marry another wife.

In December, Nwoko had revealed his love for polygamy and desire to have many children, adding that Daniels was aware of the fact that he could marry another wife.

“I come from a very polygamous environment. I love children so I want more children. She (Regina Daniels) knows this,” he had said.

“My other wives know it. So we will see what happens. There are women everywhere. That’s why you have a lot of them loitering around Zone 4, 5, 6 as sex workers. It’s not because they love the job but that the economy didn’t favour them.

“These are the repercussions of the polygamy that the westerners brought to our country. Before the advent of Christianity, the Igbo tradition allowed for many wives and children.

“That determined the size of wealth you have in those days. An average northerner marries two, three, four.

“They’re helping the women and society. The fallacy of it all is that religion doesn’t allow it in the south. Yet the average southern man has up to 10 girlfriends. The irony is so stark.”