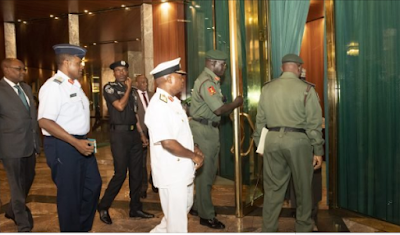 The Presidency, on Tuesday, says the fact that four service chiefs had to leave today does not mean that they have failed, adding that it was only time to inject fresh energy in the fight against terrorism and other security challenges confronting the country.

“The fact that they have to leave today does not mean they have failed. No, I wouldn’t think so. It is just that it is time to have fresh energy, fresh blood and fresh ideas in the theatre of battles where the military is involved in the country,” he said, noting that his principal commended the outgoing service chiefs.

“The president in the statement issued (today) also commended the outgoing service chiefs for their contribution to engendering a safer country –that shows that by and large he was satisfied with their performances and he just felt it is time to rejig the system, have fresh energy, fresh blood and fresh ideas. But it should be on record that he commended them and their services to the country.

“This ones that are leaving today have been there for about five years and five months. It is a matter of doing what is right at a given time,” Adesina added.

After much pressure from Nigerians for the President to bring in fresh hands to pilot the country’s anti-terrorism war especially against Boko Haram in the North-East, Buhari announced the appointment of four new service chiefs on Tuesday.

On the appointment of the new service chiefs, Adesina said the president looked into the files of eligible commanders and consulted with appropriate persons he deemed fit to talk to before making his decision.

The Presidency also noted that the appointment of the new service chiefs was not subject to federal character.