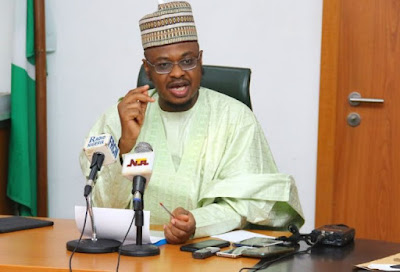 Nigerians are to be blamed for the ongoing rowdy exercise to link their sim cards to the National Identity Numbers (NIN), the government has said.

Nigeria’s communication and digital economy minister Isa Pantami said the government gave everyone about 12 months to complete the exercise but many ignored.

Pantami argued that linking sim cards to NIN was designed to be a smooth process which turned rowdy because people chose not to comply to government’s directive.

“The deadline was announced since February 2020 – the first day that the policy was announced in Nigeria was on 4th Feberuary 2020,” Pantami in an interview on Channels Television Politics Today on Friday.

“So it was announced since then that every citizen who owns a sim card should obtain a national identity number and submit same to the mobile line operator.

“Citizens, instead of going to obtain their national identity number, they fail to do that, they keep debating…they couldn’t comply.”

The government agency said telecom service providers who fail to block sim cards unregistered with NIN after the two-weeks risk withdrawal of their operational license.

“​The submission of NIN by subscribers to take place within two weeks (from today December 16, 2020 and end by 30 December, 2020),” NCC spokesperson Ike Adinde said in a statement.

The ultimatum has since been extended by up to six weeks, from December 30 to February 9, 2021.

However, many Nigerians lamented the strenuous procedures to register for NIN itself even before the deadline was announced in December 2020.

Staff of Nigeria’s National Identity Management Commission (NIMC) last week downed tools over fears of COVID-19 and lack of welfare from the government.

Data on NIMC website as of June 2020 said only 41.5 million Nigerians had the required identity numbers to link their phone numbers.

To reduce the bulk of registering over 50 million Nigerian mobile phone users with NIN, the government in mid-December 2020 licensed 173 Agents and 30 state governments/public sector institutions to conduct enrolment of all persons including legal residents into the National Identity Database (NIDB) on behalf of the NIMC.

However, the scenes at the initial registration centres does not suggest that the licensed centres are in operation as thousands continue to throng NIMC office nationwide in violation of COVID-19 protocols of social distancing and avoidance of large gatherings.

But Pantami said Nigerians are the cause of the crowded and chaotic scenes at many registration points in the country.

He said the exercise was designed to ensure that it does not take each citizen more than 20 minutes to get registered.

“The problem is you know how our citizens are – we need attitudinal change. We announced that all the processes must be under COVID-19 guidelines but citizens will go there (when) their names are not part of those to be captured. You will ask them to go but they will not,” Pantami said.

“Even security agencies are there to plead with them and they will not go and all the crowd you see in Abuja and Lagos…90% of them are not part of those that have been invited to be captured.

“The problem we have is not with the union, NIMC or the ministry, it is with our citizens. They need attitudinal change.”