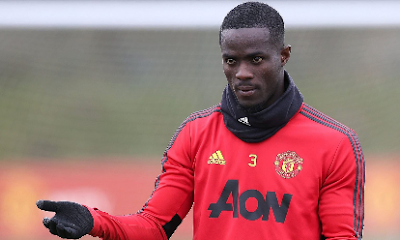 Manchester United defender, Eric Bailly, has offered to help the club’s new signing, Amad Diallo, settle in at Old Trafford after the 18-year-old sealed a £36million move to the Red Devils.

He also believes that Diallo will succeed at Manchester United.

Bailly and Diallo are both Ivoirians by nationality.

Diallo finally completed his move to Man United on Thursday after the Premier League giants agreed a £37 million deal with Atalanta on transfer deadline day in October, 2020.

The winger signed a four-and-a-half-year contract with Man United and will train with manager, Ole Gunnar Solskjaer’s first-team squad after securing a work permit.

“I know Amad (Diallo),” Bailly said as quoted by Metro UK ahead of Man United’s FA Cup third-round tie with Watford on Saturday.

“I speak with him. He’s a young player with good talents, but we know it is important to keep calm with any new guys.

“I think he will do well, but it’s important to keep calm with him.

“When I came to this team, I had players with big experience. I remember (Wayne) Rooney, Ibra (Zlatan Ibrahimovic), Antonio Valencia.”