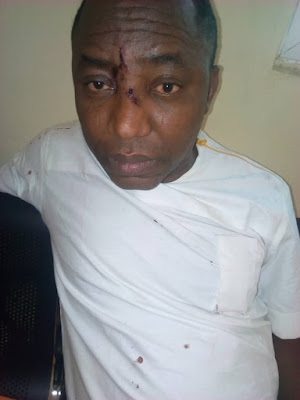 Many Nigerians have demanded the release of Sahara Reporters publisher, Omoyele Sowore, and other activists being detained by the police at the Federal Capital Territory (FCT), Abuja.

The citizens on social media asked President Muhammadu Buhari to intervene as the police have failed to speak on the arrest of the activists, 24 hours after.

NigerianEye  reported how Mr Sowore and other activists were arrested at Gudu junction in Abuja during a protest tagged #CrossoverWithProtest.

The protest, organised by the former presidential candidate, was held in some states with participants carrying candles and placards showing their grievances against the government.

Mr Sowore was reportedly brutalised before being dragged into one of seven vehicles mobilised to the protest ground by the police.

He has since been in custody alongside others at Abattoir police station in Logokoma, Abuja.

The Socio-Economic Rights and Accountability Project (SERAP), Amnesty International, Coalition for Revolution (CORE) and various civil rights organisations have demanded the release of the activists and also threatened to sue the police for the ‘illegal arrests’.

Sources familiar with the arrests said the police plan to arraign Mr Sowore and the others on Monday.

The police have not made any comment on the arrests.

The police spokesperson, Frank Mba, did not respond to repeated calls and text messages put across to him by this newspaper for his comments.

Many have likened the recent development to the 2019 incident when Mr Sowore was arrested by the Buhari administration.

He was detained for over 100 days for calling for a protest. Despite court orders granting him bail, he was only released after local and international pressure.

The police said he was planning to overthrow the government of Mr Buhari.

See some of the tweets demanding Mr Sowore’s release below:

To think that Sowore was arrested, then moments later, the president came to give us a speech on how this government plans to reinforce the hopes of Nigerians.@MBuhari is this how you want to reinforce hope? By arresting armless activists?#FreeSowore ✊🏾

Just heard from a reliable source that sowore has gone on hunger strike after being denied of his books and clothes to change with, saying "i can't feed my stomach when have not feed my brain" #FreeSowore @PoliceNG should at least allow him read during his abduction. pic.twitter.com/IgBrf0LOrF

Gen @MBuhari, Who are your advisers? Why not salvage what is left of your legacy & leave the seat of power in peace, must you end w/ it? The best gift you could give #Nigerians in #NewYear2021 is your resignation #BuhariResign! #FreeSowore #FreeJuwon #FreeDamilare #RevolutionNow

Dictator Buhari you can surely intimidate some people but not us. No amount of arrest or intimidation will stop us from demanding for good governance #FreeSowore #RevolutionNow #EndSars pic.twitter.com/6LYNvBuQkj

In spite of his ordeal, he sent this message with assertiveness:

"The arrest of an individual should not deter the education of my people. The programme should continue."

You pay bandits millions and beg them for the inconveniences you might have caused them..

The same you negotiate with terrorists, bring them back to the society, hoping to draft them into the Army..

So all the cry and the begging was to become this? Hmm, you don't know a man until you know his heart and this face doesn't reveal a man. #FreeSowore pic.twitter.com/6LtZf7mLYi

Dictators don't change and we are not expecting Buhari to repent from illegal arrest and detention, neither do we expect this regime to answer our #EndSARS demands. Our main duty as citizens is to keep protesting against injustice till we push oppressors out of power #FreeSowore pic.twitter.com/RdV95PuW2t

They've transferred culture into governance, when the king speaks nobody should bring up anything else, when an elder talks the younger ones should keep quiet.

This is @AyowoleSanyaolu in a tensed engagement with Ibikunle Amosun Former Ogun State Governor over funding of education in the state. He was abducted & brutalized along with @YeleSowore in the early hour of today by Buhari. #FreeSoworeNow #FreeSowore #RevolutionNow pic.twitter.com/X3b6auNHqc

Police brutality and illegal arrest could not stop the annual scholarship of the Sowore Foundation. Earlier today, Kiribo community of Ese-Odo LG in Ondo state benefited from @YeleSowore's self sacrificing gesture. #FreeSowore pic.twitter.com/ll6Nc5cxp4

If I choose to protest daily throughout 2021, it is not the business of Buhari, SSS or the Police. It is my business. #FreeSowore

Coming online to hear the abduction of Omoyele Sowore by Federal Government thugs last night over his style of celebrating the new year eve. Impunity knows no bound... As it is in Uganda so it is in Nigeria.#FreeSowore pic.twitter.com/cVzXwNLySF

My heart breaks that #FreeSowore is the first tweet I'll be doing in the year 2021. The level of lawlessness, impunity and crass tyranny in Nigeria is disturbing and worrisome.

The president said in his new year broadcast that he will face the challenges in the country with renewed determination.

Is this the renewed determination??

The Government wants to kick off 2021 by oppressing Nigerians.

This is how @MBuhari treat citizens demanding good governance while bandits and terrorists are being rewarded with cash and overseas trip.
Nigerians be prepared for 2021!
Sowore was brutalized overnight before he was arrested. #FreeSowore pic.twitter.com/wfRW4j0SzU

This is the 2nd time Buhari regime will kidnapped Sowore at midnight. Only armed robbers do that. #FreeSowore

We must commend Yele Sowore for consistently putting himself at the front of the line. More importantly, we must not let the govt think he is in this alone. #FreeSowore https://t.co/h8iXPlWuUD

The Police has not said why they arrested Sowore, but you're already making stupid excuses for them. Are you a citizen or a slave?

My heart breaks that #FreeSowore is the first tweet I'll be doing in the year 2021. The level of lawlessness, impunity and crass tyranny in Nigeria is disturbing and worrisome.

This is where Nigeria should wake up o. Think, what exactly do you think is @YeleSowore's offence?? Asking for better Nigeria?? Truth is they are not scared of Sowore, they're scared of you. They now once we all stand up to this, Game over. Wake up Nigeria!!! #FreeSowore Now!

Sowore was violently arrested and currently unlawfully detained for exercising his fundamental right to protest. Whereas, terrorists and bandits are being pampered and treated like kings by our political leadership.

Those supporting his detention need help from mental illness. pic.twitter.com/8pQxS6dtcK

Dear President Buhari, why do we need to trend #FreeSowore the first day of a new year. Shame no dey catch una?

The Nigerian Government tackles their greatest problem by re-arresting Sowore in 2021.#FreeSowore