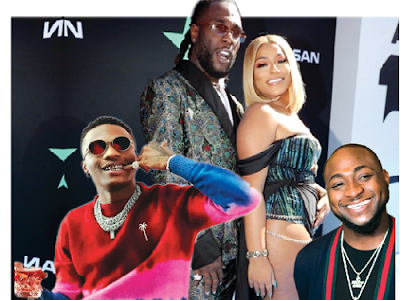 Following the alleged fight that erupted between Nigeria’s biggest stars, Burna Boy, Davido and Wizkid, in Ghana, the trio seem to have found peace in the gold coast.

The superstars appeared to have found peace individually as they enjoyed their holiday in Ghana.

In a video that was shared on social media, Burna Boy looked very happy with his stay in the city of Accra after being joined by his British-Jamaican girlfriend, Stefflon Don.

The ‘African Giant’ star couldn’t help gushing about Stefflon Don with the words, “See my sitim,” as his girlfriend was seen riding on a horse by the beachside.

Similarly, Wizkid was spotted in midst of Ghanaian celebrities. The ‘Made In Lagos’ star was seen grooving with singer King Promise, Blaq Jerzee and clique.

Also, Davido, who had threatened to quit music, was caught chilling with another Ghanaian singer, Stonebwoy in the state.

The FEM singer posted a picture of himself with Stonebwoy’s daughter, Catherine Jidula.

It was reported that there was a brawl between Davido and Burna Boy at Twist Club and Lounge, in Accra. In a viral, Wizkid was sighted at the same club drinking from a bottle to avoid trouble.