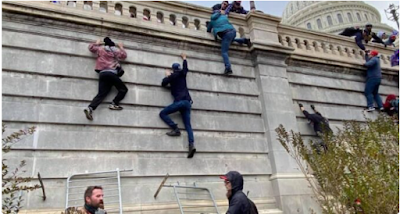 Thousands of protesters have stormed the United States Capitol as the certification of Joe Biden presidency was ongoing.

CNN is reporting that the protesters breached the Capitol police and stormed the premises of the legislative complex just as the US congress was debating the certification process.

They marched to the building not long after they were addressed by President Donald Trump who has refused to concede after losing to Biden.

The lawmakers were expected to count and confirm the votes cast by state electors during the just concluded US election.

Muriel Bowser, the mayor of Washington, has imposed a curfew to quell the riot.

Lawmakers are also said to have “gone into hiding” amid reports that there are several suspicious packages around the building.