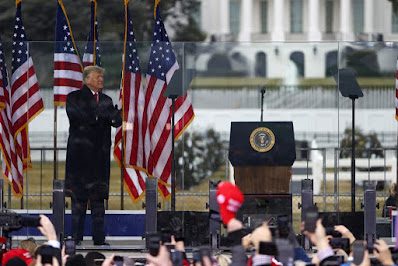 US President Donald Trump called for “peaceful” protests on Wednesday after his supporters stormed the Capitol following a rally during which he urged Congress to reject Democrat Joe Biden’s election victory.

“Please support our Capitol Police and Law Enforcement,” Trump said on Twitter more than an hour after protesters breached a security cordon.

“They are truly on the side of our Country,” Trump said. “Stay peaceful!”

The president tweeted again more than half an hour later as stunning scenes played out at the Capitol, with his supporters swarming the building and lawmakers going into lockdown.

“I am asking for everyone at the U.S. Capitol to remain peaceful,” Trump said. “No violence!

“Remember, WE are the Party of Law & Order -– respect the Law and our great men and women in Blue,” he said. “Thank you!”

The House of Representatives and Senate went into recess as protesters disrupted a session called to certify the Electoral College votes from the November 3 presidential election.

Speaking at the rally before his supporters stormed the Capitol, Trump accused fellow Republicans who have refused to endorse his baseless claims of election fraud as “weak.”

“You’ll never take back our country with weakness,” Trump said. “You have to show strength and you have to be strong.”