2021 prophecies: Mbaka foretells what will happen to Buhari govt 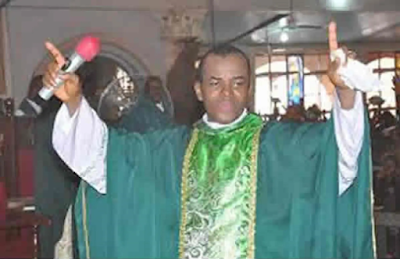 Rev. Fr. Ejike Mbaka of the Adoration Ministries, Enugu, has released his prophecies for the new year, especially about the administration of President Muhammadu Buhari.

Mbaka warned Buhari to act fast and save his government from looming extinction.

The cleric spoke during the 2020 edition of his popular annual December 31 Crossover Night tagged, ‘Cornucopia of New Miracles from God”.

Mbaka said he got a divine ministration to warn the President Muhammadu Buhari government “to be very careful,” and change its policies to accommodate the youths without politicising their condition.

“That the government should rise and urgently create jobs and innovate opportunities that would benefit the youths of the nation because they have suffered so much.

“Don’t politicise the condition of the youths, otherwise, they will arise and end the political system,” Mbaka said.

Mbaka warned that the anger of God will soon fall on the government as there may be another protest from the youths.

He said: “I can see a year ahead; it is not specific whether it is in 2021 that this will happen, but it is within a time in the time of life, that the anger of God will befall many people in the political circle because, they have looted so much and disgraced this nation enough.”

Mbaka said that those who should be working to save the country have continued to loot it dry.

The cleric pointed out that politicians in the country had for long busied themselves in “packing the nation’s commonwealth.”

Recall that the outspoken Catholic priest had recently said that God was angry at the Buhari-led government for failing to address the numerous challenges facing the country.

The fiery prophet called on Buhari to apologise to Nigerians for leadership errors of the current government and that of past governments.

Also recall that Mbaka had foretold, in one of his church programmes, that Hope Uzodinma, the candidate of the All Progressives Congress, APC, in the 2019 election in Imo State, would be declared winner of the election by the Supreme Court.

Then the Supreme court on Tuesday 19th January 2020, declared Uzodinma as the duly elected governor of Imo State.

Delivering the judgment, Justice Kudirat Kekere-Ekun said the votes due to Uzodinma and APC from 318 polling units were wrongly excluded and should be added.

Prior to the general elections in 2015, the cleric had also predicted that the incumbent President, Goodluck Jonathan will lose to the candidate of the All Progressives Congress, APC, Muhammadu Buhari.