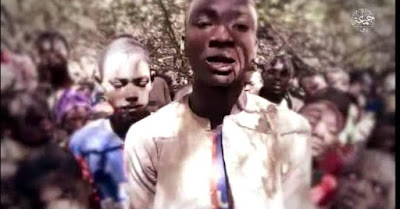 Th video was first uploaded by a website called Humangle on Thursday.

However, a minute excerpt of the video is running on Facebook.

Boko Haram released the video showing that it has custody of the students abducted from Katsina Government Science secondary school in Kankara.

According to the Humangle story, the captured students cried for help in the six minute, 30 seconds video.

The boys reportedly said some of them have been killed.

They pleaded with the government to respond to the demands of the terrorists, including paying ransom so they could be set free.

Terrorist of the Shekau Boko Haram faction stormed the school, south of Katsina in the night of Friday 11 December and stole the boys.

One of the boys who spoke in both English and Hausa said they were 520 but some of them were killed because the government sent troops to rescue them.

He urged the Federal Government to settle amicably with their abductors and advised against the use of military force in rescuing them.

A voice behind the camera could be heard telling the pupil what to say.

“Please, you have to dissolve any gang of vigilantes, close any kind of schools, excluding Islamiyyah [Qur’anic schools].

“All the troops who have come here to help us, please send them back,” one of the schoolboy pleaded in the released video.