Why I campaigned for Buhari in 2019 —Gov. Umahi 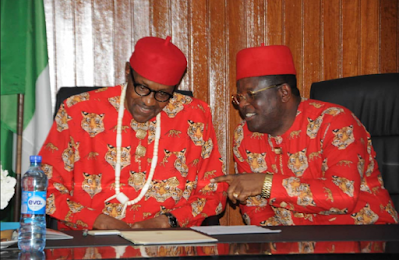 Governor David Umahi of Ebonyi State has admitted supporting the President, Muhammadu Buhari during the 2019 general election, even as a member of the Peoples Democratic Party.

Umahi said this at the foundation laying ceremony of a housing project in his hometown – Uburu – on Monday.

The governor said that his former party should not waste time in accusing him of giving the president 25 per cent of votes during the election.

“I preached it in the entire southeast zone of the country, that the person who supports us is whom we will support.

“I joined the APC for the president’s love for Ebonyi even if for no other reason.

“My eyes are on the ball–on what will get to my people,” he said.

Umahi said he plans to submit a proposal for a channelisation work which will cut across the housing project, expressing confidence that the president will approve it.

“You know I am his son, so you can be sure that I will get the approval.

“You can say anything you want to say but the president loves me and I love him also.

“I do not know how this love happened, but you should realise that grace is always upon the house of David,” he said.

Umahi said he has barred all his appointees and supporters from reacting to verbal attacks from the PDP over his decision to join the APC.

“I am the father of the state and should be ashamed that Ebonyi is heading into bitterness and disunity.

“I have decided to forgive all those who wronged me and seek same from those who may have been hurt in this process which I take responsibilities for.

“We should practice the Christianity we profess and this forgiveness has ensured that my blood pressure has dropped to 110/ 20 from 120/ 20,” he said.

The governor, however, said that such gesture should not be mistaken for weakness.

“The people should know that David is a man of war.

“God has directed that we stop this fight and we have no regrets being pencils in his hands.

“I thank all those who intervened in this matter such as the Catholic Bishop of Abakalki diocese, the Christian Association of Nigeria, the state Founding Fathers Forum , Ohanaze Ndigbo socio-cultural organisation among others,” he said.