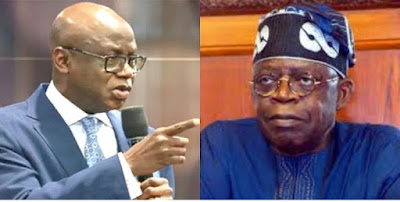 Pastor Tunde Bakare of The Citadel Global Community Church has fired at his antagonists who said he collected money from Asiwaju Bola Tinubu to support him for 2023.

He said such people should come up with facts to expose him.

Bakare had last week endorsed Tinubu for 2023 and said some rancorous Yoruba elders were jealous of the former Governor and APC National leader and ganging up to pull him down.

Many criticized Bakare for his comments, with some saying he had been bribed by Tinubu to eulogize him.

The controversial preacher reacted during a sermon on Sunday, saying that one would have thought that the whole message of over an hour would be listened to so that the context of the clip that went viral would be listened to before judgment was passed by those who considered him to have taken a 360-turnaround compared to the thoughts he had taken previously about the man many love to hate and many hate to love.

Bakare said instead, the bath water and the baby were both thrown out by some self-appointed undertakers who thought the way forward in the nation’s dilemma was to uproot the tares and separate them from the wheat long before the harvest time ordained by God.

According to him, the same undertakers willfully forgot that the current mixture of the bad, the good, and the ugly in the polity were a result of the negligence of past and present leaders, who slept on duty and allowed the enemy to sow the tares while the good man had planted good seeds on the ground.

He stated that as a matter of fact, this past week, this set of individuals went to the extreme of calling him delusional, while others concluded that money must have changed hands for him to say the things that were said contrary to his previous stand concerning the same person.

Bakare said categorically that he is never for sale because he had been bought by the Blood of Jesus Christ on the cross of Calvary and that no other price could match that.

The fiery preacher added that if anyone knew who gave him money, such should be exposed with all alacrity.

He defended himself before his congregation that he never took money and that what people were saying were the figment of the imagination of their hearts.