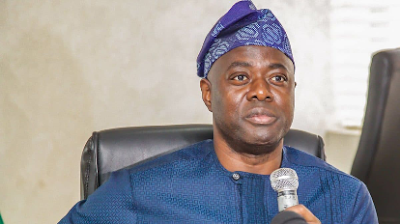 Governor Seyi Makinde of Oyo State has declared that terrorists are entering the South West geo-political zone of the country through Oke Ogun.

Makinde said terrorists and bandits from Mali and other countries in the West African region are entering through a border in Saki, one of the towns in the State.

The Governor, who spoke when he visited Saki, noted that the issue of banditry was one of the challenges his government was battling with.

He added that the inauguration of Amotekun Corps was yielding positive results.

Makinde noted that Amotekun Corps had been able to flush out some bandits terrorising residents of the State.

He said, “So, it was really tasking. Of course, in our locality here, the issue of banditry is also another issue.

“Once they gain entrance into anywhere they can operate, they will stay there.

“When we inaugurated Amotekun, you gave us your support. When some bandits went to the bush at Kishi, we were able to flush them out with all the efforts of all of us here. So, we want to use this opportunity to say thank you to you all.”