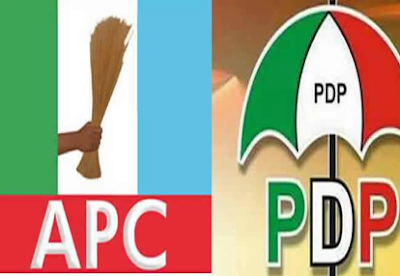 In a statement on Tuesday, APC spokesman, Yekini Nabena, said the PDP was engaging in another “beer parlour rant”.

The opposition had told the Independent National Electoral Commission (INEC) to deregister APC and declare its lawmakers’ seats vacant.

PDP made the call in response to the dissolution of all APC structures nationwide.

Nabena warned that Nigeria’s democracy was in danger judging by PDP’s utterances and actions.

“It is now clear that the PDP’s disillusionment following their rejection by Nigerians in the 2011 and 2019 general elections has degenerated into senility. It is common knowledge that the PDP leadership is currently facing a serious crisis of confidence as a result of its rudderless leadership.

“It will seem that the PDP crisis has been grossly under played. How does one explain the public rebuke by the former Senate President, Dr. Bukola Saraki to the PDP National Chairman, Uche Secondus to stay clear of the party’s reconciliation efforts?

“With the PDP as the supposed main opposition lacking the capacity to provide rigorous and intelligent interrogation of the policies and programmes of the President Muhammadu Buhari-led APC administration, we reiterate our frustration that the PDP is pushing Nigeria into a one-party state which the APC does not subscribe to”, he said.

APC called on other parties to assume “the true role of opposition”, insisting the the PDP has lost its relevance.