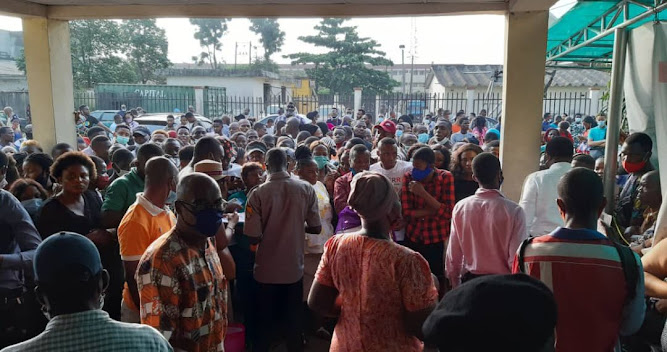 Our source who monitored registration centres in  Lagos, Plateau, Kano and Gombe states as well as the Federal Capital Territory, observed that people struggling to register disregarded COVID-19 preventive measures with many of them pushing one another.

The confusion at the NIMC offices on Monday heightened the fear of a further spread of  COVID-19  as cases rose to 78,434 on Sunday night, while the number of people that had died of the virus increased to 1,221.

Recall that the Federal Government had last week ordered telecommunications companies to deactivate telephone lines of subscribers who failed to link their phones to their NIN within two weeks.

As of October, the total number of mobile network connections was 207.58 million, but currently, only 43 million Nigerians have NIN, thus 164 million telephone users are at the risk of being deactivated on December 31.

But on Monday evening, the Federal Government bowed to pressure by extending the deadline to January 19, 2021 for subscribers with NIN and February 9 for those without NIN.

Before the government took the decision, in the FCT, Nigerians, who were desperate to get the NIN, thronged the NIMC centres. One of such centres that have been recording a huge turnout is the one at the Nigeria Customs Service Quarters in Karu, in the Abuja Municipal Area Council.

Journalists who monitored events there,  reported that a large crowd besieged the venue. They were seen in large numbers at the gate of the premises.

Although they were called inside in batches,  only a few of them were seen using face masks while social distancing was completely jettisoned.

The situation was the same at the shop adjacent the premises where they were seen struggling to make photocopies of their documents.

A cross-section of those who spoke to newsmen at the venue appealed for the extension of the December 31 deadline.

“I have been coming here for days without any luck. I later learnt that people come here very early in the morning to pick numbers and wait patiently for their turns.

“So, I decided to come in a bit earlier today. I have also resolved to wait patiently until it is my turn. But I just pray the government will consider extending the deadline so that they can save us this stress,” Martin Ugochukwu, a civil servant, told our correspondent.

Munirat Abubakar, who was among the few with face masks, expressed fear that COVID-19 could be easily transmitted among the crowd.

“You can see that I have been trying hard to keep a safe distance from the crowd by leaning on my car here and I also have my face mask on. But people have been carrying on here as if the virus does not exist, I am afraid for all of us,” the businesswoman said.

Also, large crowds gathered at the offices of the NIMC  in Lagos in a bid to register and obtain the NIN.

Most of the people who gathered at the NIMC office in Alausa, were either not wearing face masks or not observing physical distancing, thereby flouting the COVID-19 protocols.

Several Nigerians criticised the Federal Government on social media over the large crowds in NIMC’s offices.

Some of them accused the NIMC officials of demanding bribes from them. @ayegbajeje_ tweeted, “Those in the Oshodi Local Government would frustrate you. People go as early as 4am for numbers. If you can’t get the number and want to register, you’ll pay a N5,000 bribe. If you can wait, you’ll fill a form for N100, pay 300 for printing and lamination. The situation as of 8.45am today.

“The form is just an A4 paper with ‘free’ clearly written on it. If you make photocopies elsewhere, it won’t be collected from you. Presently, there are over 400+ people there defying COVID-19 guidelines at the peak of the second wave.”

Another youth said on social media that it was ironic that the government shut down night clubs over the weekend but was permitting large gatherings at the NIMC centre.

“Lagos State Government sent police to Cubana to arrest people having a good time amid all their wickedness on the citizens, because of the so-called COVID-19 yet they are inviting and dining with COVID-19 with this NIN,” @iamgerrardoxa tweeted.

Later on Monday afternoon, the NIMC shut registration centres in Lagos as the crowds became uncontrollable and because of the fear of COVID-19 spread.

Many Nigerians, who gathered at the Alausa office of the commission as early as 6am on Monday, were unable to start or complete the NIN registration.

They complained that they were not attended to by the officials of the commission despite instructions given by the Federal Government that Nigerians without the digital identity number should go to approved centres for capturing.

A senior official of the NIMC, who did not want to be identified, said the number of people at the Alausa office was more than 450 as residents who came from different parts of the state trooped to the office.

This, according to the official, was because other centres across the state had been shut down due to the need to observe social distancing in line with COVID-19 protocols.

She said, “Lagos State announced restrictions in the number of people that could gather at a time, which made all our local government centres to shut down. So, the pressure was on Alausa as the state office. That was why people from Ikorodu, Badagry, Ajah, all came to Alausa to register.”

As the fear of coronavirus spike over the NIN directive by the Ministry of Communications and Digital Economy heightened, another Federal Government agency, the Nigeria Centre for Disease Control, advised states to redouble their efforts to stem the spread of the virus.

The NCDC also told the states to reintroduce measures that would prevent mass gatherings and ensure adherence to public health and safety measures, including mandatory use of face masks, physical distancing and provision of handwashing facilities in public places.