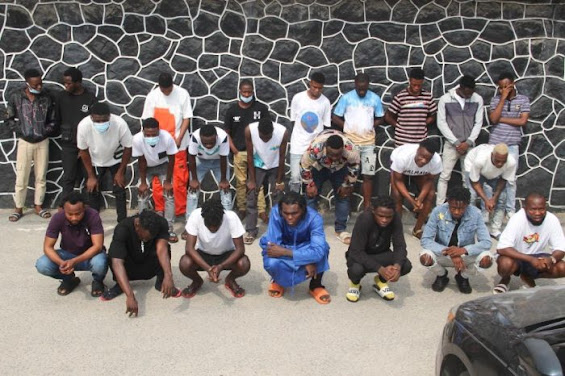 All the 32 internet fraud suspects arrested by EFCC

Thirty-two internet fraud suspects were arrested Monday by operatives of the Economic and Financial Crimes Commission, in two separate operations in Lekki, Lagos.

Some of the internet fraud suspects

They were arrested in two separate raid on on Monday, 21 December 2020.

Some of the suspects were arrested at Plot 12, Road 2, Goodnews Estate, Sangotedo, along Lekki-Ajah Way.

The remaining suspects were picked at and Chevy View Estate, Chevron Drive, Lekki.

They were all arrested following credible intelligence received by the Commission about their alleged criminal activities.

The suspects had allegedly been defrauding unsuspecting members of the public of their hard- earned money before their arrest.