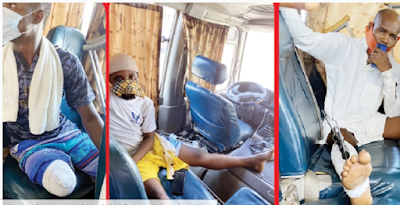 Some persons with injuries on Friday stormed the Lagos Court of Arbitration in Lekki, the hearing venue of the Lagos State Judicial Panel of Inquiry probing the alleged shooting of #EndSARS protesters by soldiers on the night of October 20 at the Lekki tollgate.

Some of the injured persons, who were brought to the LCA in a white bus, had plaster of Paris cast on their legs and arms and bandages wrapped on their heads and chests.

They claimed they were victims of the alleged tollgate shootings by soldiers at the tollgate.

The injured persons were brought by a banner-carrying group, New Nigeria Network, and counsel for some #EndSARS protesters before the panel, Adesina Ogunlana.

One of the injured, Edwin Augustine, said he ended up on crutches after a bullet pierced his thigh on the night of October 20 at the Lekki tollgate.

Augustine said, “I was shot on October 20 at the Lekki tollgate. I didn’t see who shot me. I was at the snooker board. I heard gunshots. The first one was in the air. The second was direct to people. I wanted to follow someone to the charging spot to collect my phone, but he was shot right beside his heart. Immediately he fell, I tried to turn and check what was wrong and I received mine (shot) on my thigh. I fell and I was there unconscious. When I woke up the next day, I saw myself at the hospital.”

Another injured person, Damilola Ogunleke, also attributed his wound to alleged gunshot at the tollgate, adding that he already had two surgical operations.

Ogunleke said, “I was shot on the head, but I didn’t see who shot me. It happened on the protest ground, Lekki tollgate on the night of October 20, near Access Bank.”

A man, Nathaniel Solomon, displayed the picture of a young man lying dead on the grass at the venue.

Solomon said the young man in the picture was his brother, Abouta, whom he alleged was shot dead on the protest ground at the tollgate.

Solomon said, “The person in the picture is my younger brother, Abouta Solomon. We are from Mubi North Local Government Area of Adamawa State. My brother was shot at the Lekki tollgate on October 20. It was the Army that shot him.”

Asked how he was sure that his brother died from gunshot by soldiers, Solomon said, “Because some boys that he was with told us that he had been shot, so we rushed there and picked up his corpse.

“I didn’t know when my brother left home for the tollgate. He never told me he was going there. He was living with me here in Lekki, at Marwa.

“Some boys called me. By then, my phone battery was flat, the phone had gone off. They called one of our brothers and told him that Abouta had been killed. So, we went there, found him on the grass, picked up his corpse and we went to St Paul’s Mortuary at Oyingbo.

“His corpse was at the Lekki tollgate. There were protesters around at the time. He was laid on the grass that was growing on the road divider in the middle of the road.

“That night when we took my brother’s corpse, we saw other people who had been shot, about four of them, on the ground. They were all dead.”

Solomon said the remains of his brother had since been taken to Adamawa and buried.

Speaking during the demonstration in front of the courthouse, an #EndSARS protester, Dabiraoluwa Adeyinka, who has a pending petition before the retired Justice Doris Okuwobi-led panel, said the decision to bring the injured was to debunk the claim by the Nigerian Army that soldiers neither shot at nor killed any protester at the tollgate.

“From that day till now, I have been combing hospitals; we’ve been seeing to their welfare and medical bills, from that day till now and we are still doing. This morning, we had to rush one to the hospital because he is not fine yet. We want justice for these people.

“I was active during the protest. I am a living witness. I have a victim here that still has bullet in his body that is yet to be removed. He has gone through four surgeries and some have gone through three surgeries. I have someone here that two bullets were removed from his head.”

Also speaking, the #EndSARS protesters’ lawyer, Ogunlana, claimed that agents of the Lagos State Government had been threatening or offering monetary inducement to victims to discourage them from coming to testify before the panel.

Ogunlana said, “This particular panel has shown fairness and it behoves us to present the facts that we know to the world. There have been deliberate efforts by the agents of the Lagos State Government to run some of the #EndSARS protesters out of town, either by inducing or coercing, not to allow them to come before the panel.

“We are in this struggle not only for the people who died, for the people suffering now but also for the future of our children. Government must not continue with the character of reckless impunity.

“These people are here, a lot of iron in their body. Their parents are here; they said their parents are not coming. We know what it took us to even encourage these ones to come.”

Attempts to get  the counsel representing  the Lagos State Government, Abiodun Owonikoko (SAN), to react to Ogunlana’s allegation failed as he did not pick  his calls on Friday night.