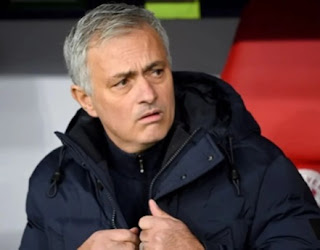 Tottenham Hotspur manager, Jose Mourinho, has said Manchester United are now one of the favourites to win the Europa League after they were eliminated from the Champions League.

United will play in the Europa League round of 32, after they finished third of their group, following a 3-2 defeat at RB Leipzig.

However, Mourinho believes it is unfair that his former club will get a second shot at European glory this season.

Spurs are already assured of a place in the last 32 of the Europa League, a competition Mourinho won during his first season at Old Trafford, ahead of tomorrow’s match against Royal Antwerp.

“And of course Manchester United is one of the top teams. The group was very hard, PSG, Manchester, Leipzig, the group was of course very hard. We all knew it was not going to be easy for any one of them, we knew from that group a top team would drop to the Europa League,” Mourinho told a press conference on Wednesday.