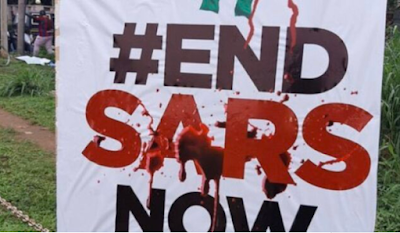 The Nigeria Police Force have come under attack for filing a suit to stop judicial panels set up by state governors to probe allegations of police brutality by men of disbanded Special Anti-Robbery Squad, SARS.

The NPF in the suit filed through their lawyer, Mr. O. M. Atoyebi at the Federal High Court in Abuja, said that the state governments lacked the power to set up panels to investigate activities of the police force.

The force told the court to stop the Attorneys-General of the 36 states of the federation and their various panels of inquiry from going ahead with the probe on police impunity.

The force described the probe as a “violation of the provisions of Section 241 (1)(2) (a) and Item 45, Part 1, First schedule, 1999 Constitution of the Federal Republic of Nigeria (as amended) and Section 21 of the Tribunals of Inquiry Act, Cap.T21, Laws of the Federation of Nigeria, 2004.”

The development has again raised concerns as Nigerians took to social media trending the ‘End SARS’ hashtag as they called out President Muhammadu Buhari-led government and the force.

Some persons threatened to continue protesting on the street as they accused the government and the police force of trying to avert justice and hide atrocities committed by SARS officers.

@Asiwajulerry “We asked them to disband and End SARS but it’s the judicial panel they want to disband.”

@Vcoo “Welcome to the second wave of End SARS. The government instead of listening to our demands, they decided to silence, intimidate and subdue us. We are back with our energy refreshed; zeal and ambition reinforced; and more determined than ever!

@GideonEkong “It’s almost two months and none of our #5for5 demands have been met. Instead they want the judicial panels to be scrapped so they can go ahead and flourish in Impunity. ”

@Toba “We told them to #EndSARSvthey hijacked the protest now they want to end the judicial panel.”

@Omokiikan “The police want to stop the investigation because several state panels have already started hearing cases on police abuses and so many hidden atrocities committed by them are popping up.”

@Aproko_Doctor “Just read that the #EndSARS panels set up in states across Nigeria are on the verge of being squashed. Nigerians don’t trust the same organisation that has hidden criminals in it for years to provide justice. Just another attempt to prevent justice. Just another day in Nigeria.”

@JosephNwakasi “The state government set up the panel by the directive of the Federal Government so I don’t understand what police mean by such, that the State doesn’t have the power unless they are playing politics backed up by the FG to hide something .”

@Onijayz “Police filing a suit to challenge the legality of judicial panels of inquiry which were established on the heels of a presidential directive? Is it safe to posit that the NPF is now working in parallel lines with the President and C-in-C?

@Basedon_believe “The Police will not allow this process go smoothly because they know they will not be able to pay for damages done over the years, have seen people come with cases of police exporting up to millions from just an individual. How will the government be able to pay everyone.”

@Bitcoinprince1 “IGP is afraid because he knows all his boys are guilty that is why he wants the panel to end. IGP is the oga at the top encouraging the brutality and I’m sure they pay returns to him.”

@Homiebishop “So, apparently the NPF has asked the court to stop the End SARS probe. My question is when are we hitting the street again?”