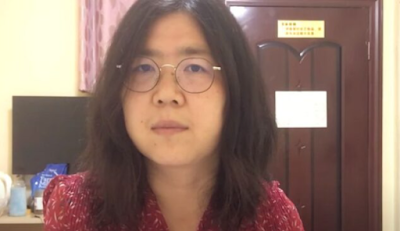 Zhang Zhan, an independent Chinese journalist, has been sentenced to four years in prison for reporting the COVID-19 outbreak from Wuhan.

According to Hong Kong free press (HKFP), the journalist was detained in May and was convicted on charges of picking quarrels and provoking trouble in her live report of the outbreak.

For three months, beginning in February, the journalist, who is a former lawyer, documented and shared videos of the COVID-19 outbreak in Wuhan on social media.

During the proceedings, the prosecutors were said to have accused Zhan of publishing large amounts of fake information to maliciously stir up the Wuhan COVID-19 epidemic situation.

In response, her lawyers said the prosecution did not provide concrete evidence of the alleged false information.

The 37-year-old journalist is the first known person to face trial for reporting the COVID-19 outbreak in China.

Her supporters were said to have gathered outside the court on Monday morning before the trial began.

The police had dispersed her supporters and journalists from the court’s entrance.

Zhan was reported to have been on hunger strike since June to protest her arrest.

Ren Quanniu, one of her lawyers, said she was force-fed through a nasal tube when her health began to dwindle.

“She said she refuses to participate in the trial. She says it’s an insult,” he said.

“She’s much paler than in her videos and photos, deathly pale.”