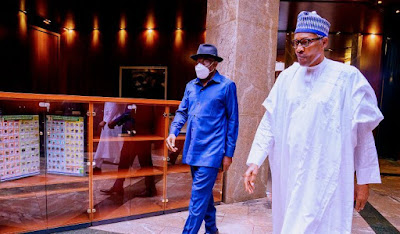 The President, Muhammadu Buhari had separate meetings with his predecessor Goodluck Jonathan and a former vice president, Namadi Sambo, on Tuesday.

Personal Assistant to the President, on Digital and New Media, Bashir Ahmad, made the meetings known on his Twitter page.

According to updates from Ahmad, the president met with Jonathan and Sambo at the Presidential Villa, Abuja.

Earlier, the decision by Yobe State Governor, Mai Mala Buni, to lead a delegation of fellow governors and leading members of the All Progressives Congress from across Nigeria, to felicitate with former President Goodluck Jonathan on his 63rd birthday had elicited reactions from across the country’s political space.

It was an unprecedented trip by leading lights of the former opposition, now ruling party, who ironically truncated Jonathan’s quest to return to Aso Rock in 2015.

Buni’s media adviser, Mamman Mohammed, while responding to inquiries about the visit, said, “His Excellency, the Governor of Yobe State, Mai Mala Buni, and some of his colleagues in the APC were at the residence of former President Goodluck Jonathan to congratulate him on his 63rd birthday, nothing more.”

Speaking in a similar vein, spokesman for former President Jonathan, Ikechukwu Eze, explained that the APC leaders visited his principal to felicitate with him on his 63rd birthday.

However, the opposition PDP was not swayed. It argued that the visit was designed to “apologise” to the former President for the campaign of calumny waged against him in the run-up to the 2015 general elections.

The party stressed that the visit in itself was proof that the APC has admitted that the nation fared better when it was run by Jonathan, a PDP President.