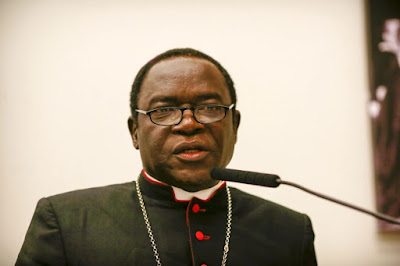 A member of the House of Representatives, representing Kabba-Bunu/Ijumu Federal Constituency of Kogi State, Teejay Yusuf, has declared that the ongoing criticisms and verbal attacks against Bishop Matthew Hassan Kukah were a deliberate attempt to divert from the genuine issues raised in the Bishop’s Christmas message to the country.

The Bishop of Catholic of Sokoto Diocese, Kukah, had in his Christmas message, “A Nation in search of vindication”, said that there was no way any non-Northern Muslim President could have done a fraction of what President Buhari had done by his nepotism and gotten away with it.

The message, however, met stern resistance and condemnation from the government and members of different groups, such as MURIC, the Arewa Youth Consultative Forum, Northern Elders Forum, Coalition of Northern Groups, among others.

In a statement issued in Abuja on Tuesday, Teejay Yusuf noted that the needless attacks from the Federal Government and what he described as “its bands of sycophants” from the North and other parts of the country, reflect untold hypocrisy and double standards.

The House of Representatives member observed that most of those attacking the Catholic Bishop have extended family members who are facing the stark realities of current waves of insecurity, unemployment and poverty that is far much worse than what obtained 6 years ago.

He emphasized that Bishop Matthew Hassan Kukah’s decision to speak truth to power was applauded during the Goodluck Jonathan era but was now being mischievously misinterpreted as a call for insurrection.

He added that it was even more interesting when the minister with the least level of credibility in the entire Federal Cabinet speaks against the expression of such truthful criticism about grave national issues at Christmas period.

According to him, the criticism was an essential part of democracy.

He recalled that in the January 6, 1984 letter from the Head of the Federal Military Government, Major-General Muhammadu Buhari to then British Prime Minister, Mrs Margaret Thatcher, he justified the treasonable coup plot that overthrew the democratically-elected Shehu Shagari administration on the basis of failure to actualize citizens’ optimistic expectations.

Specifically, he stated that the letter highlighted corruption in the public service, adding, ‘incompetence in the management of national resource, led the nation to accumulate huge internal and external debts’, loss of jobs, inflation and insecurity “whereby hired assassins and marauders were openly beginning to practice their trade in broad daylight”.

Nevertheless, he said, in spite of necessary criticisms and unavoidable political differences, Nigerians must all make it clear that whether it is Buhari or any future President from East, West, North or South, Nigerian citizens would resolutely resist any coup agenda by any military adventurer and their anarchist civilian cohorts.

The federal lawmaker further explained that Kukah’s critics easily missed the point without realising that genuine lovers of truth and justice would rise to support the cleric against those making futile efforts to discredit his truthful message.

He added that Bishop Kukah spoke against currently prevalent nepotism, as well as the fearsome indicators of a failed state when he raised issues of ‘endless bloodletting, a collapsing economy, social anomie, domestic and community violence, kidnappings, armed robberies.’