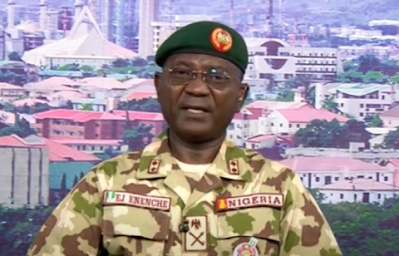 The Defence Headquarters, on Monday, says it is wrong to tag the troops of the Nigerian Army as extortioners at checkpoints in Borno State.

The statement was titled, ‘Re- Nigerian Army On Operation Lafiya Dole Collect Money At Check Points In Borno State’.

Enenche stated, “The attention of the Nigerian Military has been drawn to the media/air accusation by the Executive Governor of Borno State, that Nigerian Army personnel deployed at checkpoints in Operation Lafiya Dole collects money from commuters. While the Nigerian Military is in no way joining issues with the Governor, it is necessary to clarify this generalised statement against the troops who without hesitation lay down their lives for all Nigerians.

“It is worthy of note that, the Armed Forces of Nigeria have internal mechanisms to checkmate and sanction appropriately its erring personnel.

“Additionally, reported cases from the public in this regard are investigated and given the desired attention. Thus, it will not be correct to rely on media or open-air accusation to tag our gallant Nigerian Army personnel as extortioners at checkpoints in Borno State. All personnel of the Armed Forces are patriotic and focused on their call of duty.

“The High Command of the Nigerian Military hereby re-states the commitment of the Armed Forces of Nigeria and other Security Agencies to tackling and ending the insurgency and terrorism in the North East.”

Zulum had also slammed the military over what he described as the routine attacks of travellers and villagers by Boko Haram along Maiduguri-Damaturu highway.