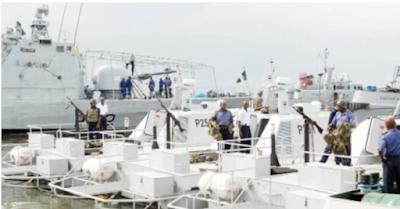 The Nigerian navy has declared wanted, 43 of its personnel whom it accused of deserting the service.

The notice was issued in a circular containing the names and photographs of the deserters, and displayed at the Navy headquarters in Abuja.

The navy authorities called on anyone with useful information that could lead to the arrest of the fleeing personnel to report to the nearest naval base or security station.

All navy personnel with information on the whereabouts of the deserters were directed to effect their arrest or be dealt with as an accomplice.

“Above are the Nigerian Navy Personnel who have deserted from Service recently. Accordingly, you are please requested to assist in providing useful information that will lead to their arrest or you may apprehend any one of them when seen and handover to the nearest Nigerian Navy base or security station,” the circular read.

The personnel reportedly left their duty posts when their ships arrived in some European countries.

Suleiman Dahun, navy spokesperson, was not reachable for comment as of the time this report was filed.