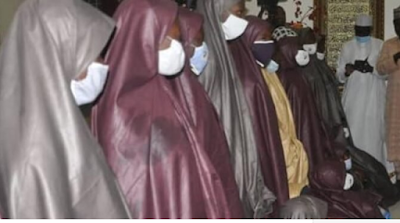 Some of the 26 girls, who were kidnapped from their village in Faskari local government area of Katsina state, have narrated their ordeal in the hands of abductors.

The girls were abducted from their homes on October 13, and were eventually released on November 3.

The details of their release had caused controversy concerning a ransom of N6.6 million said to have been paid to the kidnappers.

While the state government had claimed that the victims were released due to its intervention and negotiation with their abductors, the community countered the government’s claim.

Narrating their ordeal in an interview with Daily Trust, some of the victims said they trekked for three nights in the bush and were raped several times.

One of the victims reportedly said about eight of the 26 abductees were spared from the sexual abuse.

“We trekked for three nights,” the victim was quoted to have said.

“When the day breaks, they would camp us in the bushes to spend the day there and at night, we would continue with the journey. That was what we did for three nights.

“We trekked throughout the night in the forest till we were weak. We were threatened with death and sometimes beaten, after which we were supported by those that are stronger to enable us to continue to trek.

“However, the remaining female abductees were repeatedly raped throughout the period.

“For those of us that were not raped, the bandits would come and hit us on the head about ten times at night and two times on our back the following day.”

Another rescued victim was quoted to have said she was beaten to the extent that she had to undergo blood transfusion after regaining freedom.

Muhammad Amadu, one of the community leaders who said he took the ransom to the bandits, explained that an initial sum of N2.1 million was paid to the bandits but they asked for more.

“We dropped that amount and returned, but they called back that the money was too small for the release of our people,” he reportedly said.

“After the second abduction, we began another round of negotiation with them, and that was how the total amount given to them rose to N6.6 million,” he was quoted as saying.

“When they finally released them, we were invited to the Zamfara government house, where we were told that our children were released as a result of the intervention of the state government. We didn’t talk to them because that was not our concern. Our major concern was the freedom of our people.

“Even the abductees were made to say that they spent only five days in captivity, which was actually not the case.”