BREAKING: I wish I brought a rifle to try it on you, army commander jokes with panel member over Lekki shooting 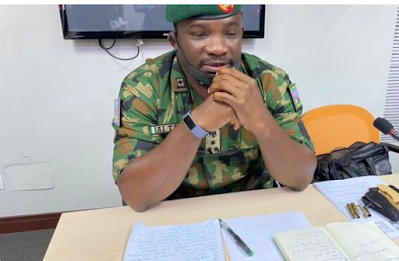 Ahmed Taiwo, a brigadier general  and commander of 81 military intelligence brigade of the Nigerian Army, joked about using a rifle on members of the Lagos judicial panel of inquiry, on Saturday.

Taiwo was answering a question posed by a panel member on the effects of blank ammunition.

The brigadier-general had said the army used blank ammunition rather than live bullets to disperse the #EndSARS protesters at the Lekki tollgate.

“I am an expert in ammunition having spent so long in the army. However, you may wish not to take my word for it but look up the effects of blank ammunition,” he said.

“Even if you put it against your skin and fire, you will only have a burn mark to show for it. I wish I brought a rifle to try it on you.”

Maintaining that it was against the code of conduct of the Nigerian Army to fire at peaceful civilians, Taiwo said a single discharge of live ammunition was capable of killing up to three persons when fired in close proximity.

“When fired, it has a muzzle velocity of 700m per second, it is effective up to 600m. That means if you fire a rifle, it will kill someone up to 600m away depending on the skill of the firer, ” he said.

“With that heavy muzzle velocity, if that rifle is shot at somebody at 10m, the damage is unimaginable. With that crowd you see there, if they fire you won’t have a kill per person but perhaps three kills per person.”