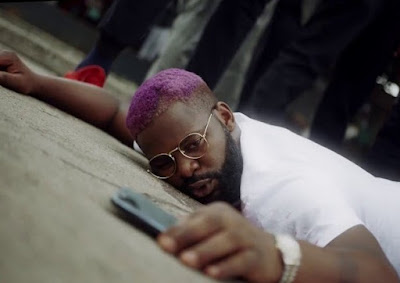 Folarin Falana, a Nigerian rapper better known as Falz, has come through with the visuals for ‘Johnny’, a single off ‘Moral Instruction’, his 2019 album.

The gifted rapper took to his social media pages to announce the release of the project to his numerous fans on Tuesday.

The less than four-minute video sees Falz paying tribute to victims of police brutality in Nigeria and those killed during the recent #EndSARS protest.

Using ‘Johnny’ to depict a typical average Nigerian youth, the singer croons about injustice and extrajudicial killings holding sway in the country.

The video, directed by Oluthewave, also examines the pains of the families who had lost their loved ones to police brutality.

The project includes footage of the shooting of unarmed #EndSARS protesters by men in military uniform at Lekki toll gate axis of Lagos state on October 20.

In a post on his Instagram page, Falz explained that the video was inspired by his quest to amplify stories of those unlawfully killed in the country.

“We will never forget the heroes that have been unlawfully slain. This is for them. For every single Nigerian life snatched away unlawfully, we must make sure we get justice,” he wrote.

“Almost two years since I released the audio. Even more disturbing to think that as time passed, the message became more relevant.”

On Tuesday, Kenechukwu Okeke, a human rights activist, filed criminal proceedings before a magistrate court in Abuja against Falz and 49 other persons for “promoting” the #EndSARS protests.