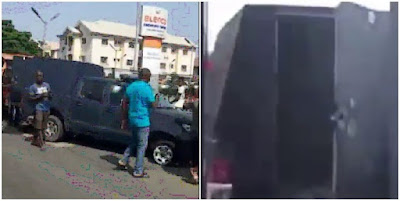 Gunmen suspected to be armed robbers reportedly attacked a bullion van in Ajah area of Lagos, Southwest Nigeria and made away with millions of naira.

The incident was said to have occurred at Ado road in Ajah. There was sporadic shooting as the robbers broke open the bullion van and carted away millions of naira.

The robbers reportedly rained bullets on the bullion van and shot the lock opened before carting away the money.

The attack lasted for several minutes until the robbers accomplished their mission and left.

Unconfirmed source said one person was killed in the attack.

Eyewitnesses said the incident occurred around 3.00pm on Thursday.

The gunmen were said to be five in number.

A video of the scene showed the robbers shooting sporadically, leaving a man dead on the road.

The bullion van was attacked at the premises of Blenco Supermarket at Ado Road, Ajah.

The gunmen were said to have also attacked a water tanker, forcing the driver and motor-boy to scamper for safety.