Trump vs Biden: Pope Francis finally reacts to outcome of US election 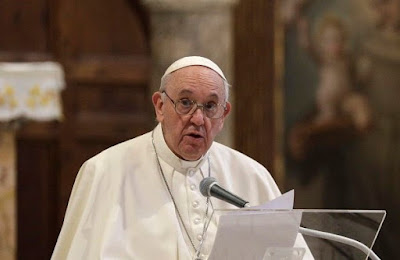 The Pope and Biden spoke on the phone earlier on Thursday, according to the Biden Transition Team, as quoted by Metro UK.

“The president-elect thanked His Holiness for extending blessings and congratulations and noted his appreciation for His Holiness’s leadership in promoting peace, reconciliation, and the common bonds of humanity around the world.”

“The president-elect expressed his desire to work together on the basis of a shared belief in the dignity and equality of all humankind on issues such as caring for the marginalized and the poor, addressing the crisis of climate change, and welcoming and integrating immigrants and refugees into our communities.”

Biden, who is only but the second Catholic President in the US, has met at least two of the last three Popes.

The US presidential election was a tight battle between the incumbent President Donald Trump and Joe Biden, candidate of the Republican Party.

Joe Biden, however, emerged as winner after polling over 270 electoral college votes, although the winner has not been officially announced.

Although Biden has since assumed his role as the President-elect, preparing to take over the White House, the incumbent, President Trump has refused to concede defeat.

Trump has gone to court challenging Biden’s victory in the election which he (Trump) alleged was marred by massive corruption and fraud.

The incumbent has recently expressed hope of being declared winner of the election, saying results that would be announced next week would put him ahead of Biden.

Pope Francis had recently said that Trump “is not Christian” in reaction to the President’s campaign promises to deport more immigrants and force Mexico to pay for a wall along the border.