US election: I warned of disaster, America can’t be disgraced – Trump 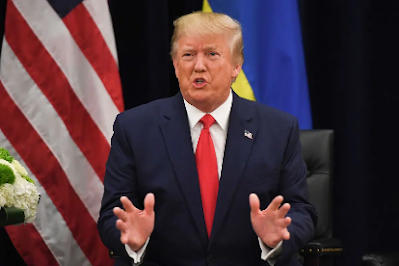 United States President, Donald Trump is not backing down on his claim of election fraud.

On Thursday night, Trump told the nation that he was hearing “horror stories” of how Democrats were allegedly manipulating the poll and mail-in ballots.

The Republican said he warned the voting system would be a disaster.

Trump stated that the ongoing exercise was not about him or his challenger, Joe Biden.

The President stressed that the election was a matter of America’s democracy and image.

“I have said very strongly that mail-in ballots are going to end up being a disaster. Small elections were a disaster, this is a large-scale version and it’s getting worse everyday. We are hearing stories that are horror stories, absolute horror stories.

Trump is trailing Biden, according to official tallies.

Key swing states, including Pennsylvania, Georgia, North Carolina and Alaska, are yet to be called.

Americans and the world are keenly following results of the election regarded as one the most intriguing in history.