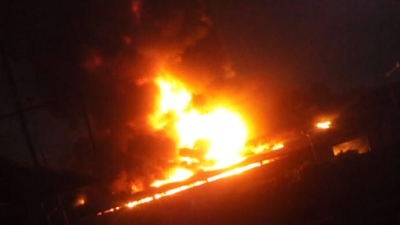 A driver and a motorboy were on Saturday burnt to death in an overnight tanker explosion on the Lagos-Ibadan Expressway in the Ifo Local Government Area of Ogun State.

The inferno also destroyed 35 vehicles reportedly parked for sale along the traffic corridor.

Our correspondent gathered that the diesel-laden tanker fell on its side and spilt its content which later sparked off the fire.

The Spokesperson for the Traffic Compliance and Enforcement Corps, Babatunde Akinbiyi, confirmed the incident.

Akinbiyi said one person sustained injury and has been taken to the Olabisi Onabanjo Teaching Hospital, along with the remains of the two dead victims.

According to him, The TRACE PRO, who said the accident occurred around 2am on Saturday, explained, “The driver and the motorboy died in the ensuing inferno that engulfed the scene with about 35 vehicles parked along the traffic corridor for sale burnt down.

“One injured victim is presently confirmed and he has been taken to Olabisi Onabanjo Teaching Hospital, OOUTH, along with the dead victims.”

Akinbiyi advised motorists to avoid the Lagos-Ibadan Expressway presently and seek alternative routes because of the traffic challenge the accident has brought in its wake.