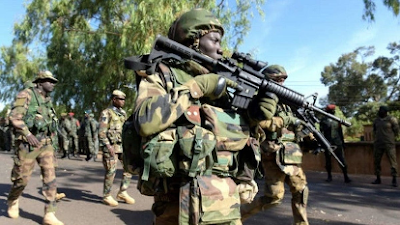 The Defence Headquarters on Monday confirmed that troops of Operation Accord have apprehended two suspected gun runners and eliminated two bandits in Sokoto and Zamfara.

The Coordinator, Defence Media Operations, Maj.-Gen. John Enenche disclosed this in a statement on Monday in Abuja.

Enenche said the success was recorded on Sunday, following credible intelligence on the movement of the suspects in Tangaza town, Sokoto State.

He said the suspects include Abubakar Mohammed from Bodinga Local Government Area (LGA) of the state and Ansi Usman Janare from Gohono village in Tangaza area.

According to him, items recovered from suspects include one light machine gun, four AK47 rifle magazines, 586 rounds of 7.62mm NATO ammunition, 100 rounds of 7.62mm Special Ammunition and one motorcycle.

Enenche said the suspects have been kept in custody for further action.

According to Enenche, the military troops also eliminated two bandits at Fegi Baza village in Tsafe LGA of Zamfara, following credible intelligence that bandits were operating in the area.

He named items recovered to include one motorcycle, four magazines and two cell phones.

He confirmed that the suspects are now in custody, awaiting necessary actions, adding that the gallant troops have continued to dominate the general area with aggressive and confidence-building patrols.