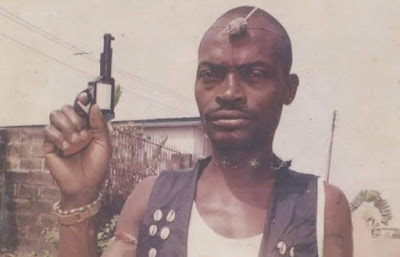 Shina Rambo, a former notorious armed robber, has narrated various dreaded measures he took in search of occultic powers in the past and how he is now a changed man working for God.

Rambo, who was one-time Nigeria’s most-wanted suspect, spoke on Sunday when he appeared on ‘Opeyemi‘, a programme on Fresh 106.9 FM, in Ekiti.

During the show, he confessed to being the same dreaded armed robbery kingpin who terrorised several parts of the country in the 1990s during which many people were killed

Rambo recounted how he visited about 21 places in search of powers and was asked to suck the milk of “a possessed woman’s bre*st.”

“My father was a prominent person, and a soldier moving from one part of the country to the other. In my attempt to acquire black power then, I went to a total of 21 places, prominent among which were Minna, Niger State, and later Oro, in present day Kwara,” he said.

“I was in one of those places for 91 days in Idanre, Ondo State, where we were mandated to be sucking the milk of a possessed woman’s brexst, as our only food and water, so occult powers can transmit to our body.

“At the end of the whole exercise, I possessed a total of 901 power images that can be used to cajole or disappear at a scene of crime and project the image of another person. So, if I was killed at a particular point, I had the powers to resurface in another place in another form.”

He, however, revealed that he had turned a new leaf, adding that he is now a born again committed to preaching the gospel of Christ to the world.

He added that his name after giving his life to Christ is Olawanifise Matthew, while quoting Bible passages intermittently on the show.

Rambo said contrary to several reports, especially by the police that he had been killed on numerous occasions, he is still alive.

He expressed regret over various crimes perpetuated by his gang in the past, attributing such to evil spirits.

Rambo described the killing of his wife and three children on a single day as his worst regret in the past when he was into crime.

“I was to be arrested on the fateful day but those that came could not find me, so they killed them,” he said.