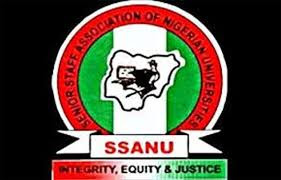 A former branch Chairman of the Senior Staff Association of Nigeria Universities at the Modibbo Adama University of Technology, Yola, Mohammed Ibrahim has been elected the new SSANU President.

He emerged in a keenly contested election during the 2nd Quadrennial National Delegates Conference held in Abuja on Thursday, where he polled 501 votes to defeat his opponent, Solomon Affa, who scored 392 votes.

Alfa was the immediate past Vice President representing the North.

The position of the Deputy President was won by Dr Leku Laku of the University of Calabar who scored 512 votes to beat his closest challenger who polled over 390 votes.

In his acceptance speech after being declared the winner of the election by the Chairman of the Electoral Committee, Dr Linus Akata, the new President described his emergence as divinely ordained.

Ibrahim, who has taken over from his predecessor, Samson Ugwoke, extended a hand of fellowship to his challenger in the poll, noting that he needed the support of every member to move the union forward.

He stated, “Conscious of our challenging circumstances, I want to state that the task ahead of us, every one of us, is no mean task. It is not going to be a walk in the park.

“But it is possible to reposition SSANU; rebuild friendship; forge new alliances; inject patriotism, restore and shore up confidence among the ranks of SSANU membership. Yes, it is possible to start a new beginning.”