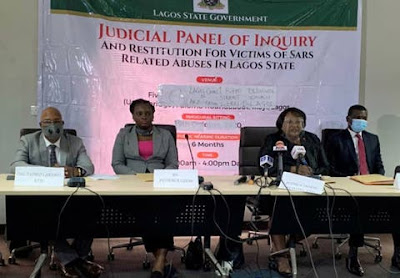 Two lawyers, Adekunle Augustine and Semion Akogwu, have gone before the Federal High Court in Lagos seeking an order disbanding the Lagos State Judicial Panel of Inquiry set up to look into complaints of human rights abuses by men of the disbanded police Special Anti-Robbery Squad.

The judicial panel, headed by retired Justice Doris Okuwobi, also has the mandate to probe the alleged shootings at #EndSARS protesters by soldiers on the night of October 20 at the Lekki tollgate.

But the lawyers, in their fresh suit, are asking the court to disband the panel and nullify all its proceedings so far.

The plaintiffs are contending that since the soldiers who allegedly shot at #EndSARS protesters at the Lekki tollgate were invited by the Governor of Lagos State, Mr Babajide Sanwo-Olu, the same governor cannot set up a panel to probe the incident.

According to the lawyers, the setting up of the judicial panel is in conflict with the provisions of Section 36 of the Constitution.

Listed as defendants in the suit are the Governor of Lagos State; Judicial Panel of Inquiry and Restitution for Victims of SARS-Related Abuses in Lagos State and Lekki Tollgate Incident; the panel’s chairman; and the Attorney General of Lagos State.

They are seeking “an order of this honourable court disbanding the 3rd defendant (panel) and nullifying its proceedings and whatsoever actions taken thereby so far, to give way for a credible and independent commission of inquiry to be set up by the Federal Government to take over the mandate of the 3rd defendant as contemplated by its establishment abi nitio.”

The court has yet to fix a hearing date for the suit.