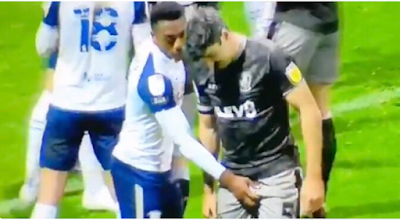 The incident was said to have happened in the 62nd minute of the game but was not seen by match officials at the time.

Preston had won the game 1-0 with Tom Barkhuizen scoring the only goal of the encounter to secure three points for his side.

Camera footage, however, appeared to have shown Fisher touching Paterson in the groin area while trying to defend a Sheffield Wednesday corner.

In the footage, Paterson attempted to get the attention of David Webb, the match referee, but Fisher is seen repeating the action amid the former’s complaint.

The FA will look into an incident which appeared to show Preston's Darnell Fisher twice grabbing Callum Paterson's genitals in their win over Sheffield Wednesday.

If found guilty, Fisher, who has been given till Tuesday to respond to the charge against him, could face a ban of at least three matches. This is just his action contravenes rule three of FA’s regulations.

“A participant shall at all times act in the best interests of the game and shall not act in any manner which is improper or brings the game into disrepute or use any one, or a combination of, violent conduct, serious foul play, threatening, abusive, indecent or insulting words or behaviour,” the rule states.

📝Preston North End have been contacted by the FA regarding a charge against Darnell Fisher following Saturday’s Championship fixture against Sheffield Wednesday.

In a statement on Monday, Preston, while acknowledging the charge, said it will respond to it before 6pm.

On its part, Preston said: “It has been contacted by the FA regarding a charge against Darnell Fisher following Saturday’s Championship fixture against Sheffield Wednesday. The club acknowledges the charge and will respond before 6pm on Tuesday November 24 as requested by the FA.”