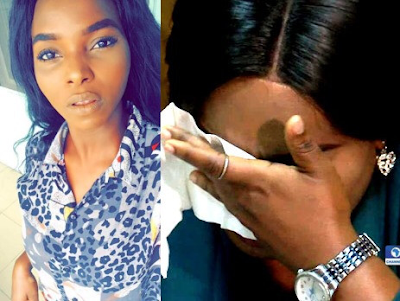 Raw emotions could be felt at the Independent Investigative Panel (IPP) on human rights violations by the defunct Special Anti-Robbery Squad (SARS) and other Units of the Nigeria Police Force set up by the National Human Rights Commission (NHRC)  on November 5th,when a lady, Chinenye Igwetu shared the sad story of how her sister, Linda, was shot dead by a trigger-happy police officer just a day to her NYSC passing out parade on July 3, 2018.

Chinenye told the panel that a policeman, identified as Inspector Benjamin Peters of the Federal Capital Territory (FCT) Command, allegedly shot her sister around the Ceddi Plaza bridge in Abuja.

“On the 3rd of July 2018 the deceased went out after work to celebrate her passing out from the National Youth Service, which was supposed to be the next day.

“Prior to her death, she was living with me and worked at Outsource Global Company, Mabushi (Abuja). Her working hours were between 1pm and 11pm everyday.”

Chinenye said her late sister sent her a WhatsApp message around 10.22pm on July 3, 2018 informing her she was going out with her colleagues in the office, Mr. Tobi and Mr. Arafat, to have drinks and also celebrate the conclusion of her NYSC scheme.

She told the panel that she and her sister shared the same bed in their apartment and that she was shocked that at about 2am when she woke up to use the restroom, her sister who had her own key to their apartment, wasn’t yet home.

“At about 4.35am, I got a distress call from unknown number and it was Mr. Bamidele Tobi asking me to come quickly to Garki Hospital that something happened on their way home from Ceddi Plaza. I got to the hospital and was informed that my sister was shot by Inspector Benjamin Peter.

Mr. Tobi narrated that on their way home, while driving; he heard a loud sound, and thinking that it was his tyre.

He said my late sister tapped him from the back seat that something hit her below her breast. He said when they (Mr. Tobi and Arafat) looked back; they say my sister panting and was drenched in her blood.

He said when the realized that the sound they hard was that of gunshot and that my sister was hit by stray bullet, they drove straight to the nearest hospital, which was the Garki Hospital.”

Chinenye said the hospital staff did not attend to her sister timeously as they asked for many things at the same time, including blood and police report. She said while they were making efforts to get blood, the news that her sister eventually died was conveyed to her around 6am on July 4, 2018 by a female nurse in the hospital. At that point, Chineye broke down and wept.

She said following the public outcry, the then-Senate President, Bukola Saraki, intervened and set up a five man investigation panel. Chineye said when Inspector Peter appeared before the panel, he claimed that they were flagging them down, but they did not stop and they shot with the intention to deflate their tyres.

She said nothing came out of the involvement of the panel set up by Saraki, adding “we got tired and gave up. It is like everything in Nigeria. Nothing happened after.”

On what she wants the panel to do for her, Chineye said:

“I want justice, I want my family to be be compensated. I want my mum to smile again. My parents are alive. I am the senior sister. I am the first daughter.”

The panel’s chairman, Justice Suleiman Galadima directed that proceedings of the day be sent to the police, who are the respondents, to enable them to present their defense on November 16, 2020 when the case will again come up.