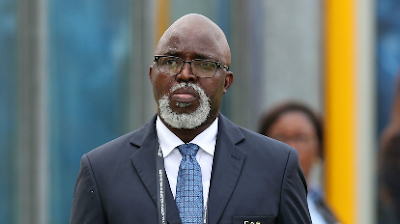 The President of the Nigerian Football Federation (NFF), Amaju Pinnick on Friday broke down in tears after the national team’s 4-4 draw with Sierra Leone in a 2022 Africa Cup of Nations qualifier.

The Super Eagles went four goals up in the first half, but ended up drawing 4-4 with the visiting team.

Pinnick, speaking with the team in their dressing room after the game, said the draw was the worst result under his tenure.

“It’s football, definitely, it’s football, it can go either way, but what happened to us? Were we complacent? Were we just so comfortable that we were leading 4-0 and all of a sudden, the goals started coming in?

“At the end of the day, nobody is going to call your name everybody is the coach and Amaju Pinnick (they’ll call), that is the truth. But unfortunately, he (Gernot Rohr) was not on the pitch, I wasn’t the one on the pitch. I saw the reaction of your captain.

“After they scored the fourth goal, I shed tears for the first time in a long time,” he said.