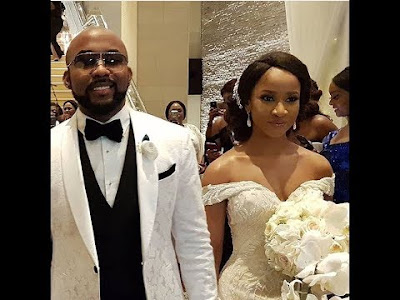 Nigerian Singer, Banky W has revealed that marrying Adesua Etomi was the second best decision he ever made in his life.

According to him, though their marriage hasn’t been all perfect, it has been the best because they made the decision to make God their foundation.

“Because you can fix cracks in the walls, refurbish the rooms and repaint the halls, but you can’t get the foundation wrong if you want any chance of the house standing at all. The structural integrity of a house requires a foundation that is built to last.

“I recently heard a Pastor say that love can’t keep a marriage going he said it takes God and commitment. I think maybe he had a bit of a misunderstanding of what love really means.

“God is love and love is commitment. Without both, it certainly isn’t love and it definitely won’t work. People sometimes think Susu led me to God.

But it’s not true. God led me to Susu. And He has kept us through it all.

“Marrying Adesua Etomi is the 2nd best decision I made in my adult life. The best was re-dedicating my life to Christ.

“Susu, I am thankful for you and grateful to you. You are everything I want and much more than I deserve. You mean the world to me and I intend to spend the rest of my life proving it. I love you now more than ever,” he said.