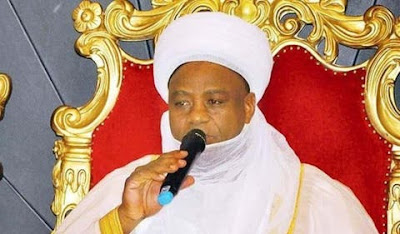 Northern elders have commended the Sultan of Sokoto, Alhaji Muhammadu Sa’ad Abubakar for speaking out on the deplorable security situation in the region.

According to the elders, the position of the Sultan is a true reflection of the state of insecurity in the North which,  they maintain, is largely responsible for the food crisis besetting the nation.

The reverred monarch had, at Thursday’s meeting of the Nigerian Inter-Religious Council, NIREC, decried the precarious security situation in the North, saying the region was now the worst place to live.

Reflecting on the activities of bandits in the North West, the Sultan said “people leave foodstuff in their houses for bandits.”

While calling for urgent action through actionable engagement, the spiritual leader of Muslims in Nigeria said: “Security situation in northern Nigeria has assumed a worrisome situation”, regretting that no strong media platform could report the story to the world.

The monarch had said:”Few weeks ago, over 76 persons were killed in a community in Sokoto in a day. I was there alongside the governor to commiserate with the affected community.

“Unfortunately, you don’t hear these stories in the media because it’s in the north. We have accepted the fact that north doesn’t have strong media to report the atrocities of these bandits.

“People think the north is safe but that assumption is not true. In fact, it’s the worst place to be in this country. Because bandits go around in the villages, households and markets with their AK 47 rifles and nobody is challenging them.

“They stop at the market, buy things, pay and collect change, with their weapons openly displayed. These are facts I know because I am at the centre of it. I am not only a traditional ruler; I am also a religious leader.

“So, I am in a better place to tell the story. I can speak for the north in this regard because I am fully aware of the security challenges there. We have to sincerely and seriously find solutions to the problem; otherwise, we will find ourselves soon, in a situation where we would lose sleep because of insecurity.

“As religious leaders, we must promote peace, love, unity and tolerance among our followers. We will discuss all these issues at the close door session of the meeting and possibly come out with strong suggestions for government”.

But reacting to the monarch’s expression,the elders operating under the aegis of Coalition of Northern Elders for Peace and Development, in a statement,Saturday,by their national coordinator, Engr. Zana Goni and the National Women Leader,Hajia Mario Bichi, said the Sultan vindicated their consistent alarm on the state of insecurity in the region.

The elders therefore, called on other prominent leaders in the region to join their voices in projecting the true position of things in the region, in order to attract the attention of relevant authorities.

More importantly, they reiterated their call on President Muhammadu to rejig and restructure the security architecture in the country, in order to cause meaningful change in status quo

The statement reads: “We most respectfully commend the Sultan of Sokoto, our father,for stating the true position of things in the North, as it concerns insecurity.

“We had said it over and over again, that the state of insecurity had reached a point where our farmers can hardly access their farms, even as travellers on busy highways can no longer guarantee their safe arrival without being kidnapped.

“Our mothers, fathers and children are now at the mercy of terrorists and bandits, who kill, harass and destroy property without being confronted, in many instances, by our security operatives.

“As patriotic elders, we think the position of the Sultan is a Clarion call to our dear President, His Excellency Muhammadu Buhari, to restructure the security architecture in the country without further delay.

“we applaud our President for ensuring huge budgetary allocation to the military and security sectors, thereby demonstrating his interest in securing lives and property.

“We, however, regret that our Security Chiefs have not shown commensurate commitment in tackling these security challenges, owing to what we see as lethargy and spent ideas.

“Accordingly, we call on President Muhammadu Buhari to sack the Service Chiefs without further delay, and appoint younger senior officers that will bring fresh perspectives and ideas to bear in addressing the deteriorating security situation in the North in particular, and the country in general”.