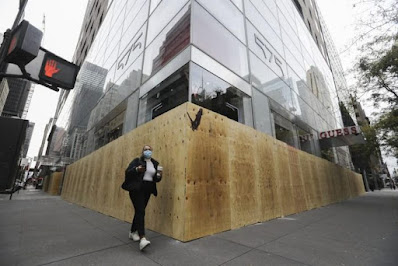 New York and other cities across the United States on Tuesday remained apprehensive over potential violence in spite of relative calm as vote counting gets underway in the country’s presidential election.

As of Tuesday afternoon, many businesses in New York were still fortifying their storefronts with plywood ahead of announcement of results.

Similar scenes played out in other places like Chicago, Atlanta, Denver, Philadelphia and Washington, D.C.

“I am not taking chances, my friend”, a jewellery shop owner, who identified himself as Navid, told the News Agency of Nigeria (NAN) in Manhattan, New York.

“I agree with you that there is calm right now, but nobody can tell what happens when the results start coming,” he said.

READ ALSO  Iran's Rouhani to Trump: You cut Soleimani's arm, we cut off your legs

Tuesday has been described as the most divisive U.S. presidential polls in decades, and it came after a long and bitter campaign.

There are reports of clashes between supporters of the two major candidates, President Donald Trump and former Vice President Joe Biden, in New York and elsewhere.

Trump has repeatedly refused to commit to a peaceful transition of power should he lose the election.

The president is insisting that the winner must be declared on Tuesday night, before many votes will be counted.

These have left many Americans worried that he would not concede if he loses.

Mr Basil Njoku, a Nigerian-American, described the happenings as unbecoming of America, “a country that has been touted to be the bastion of democracy”.

Njoku said: “I have been in this country for more than 20 years, and I can tell you that what is happening is un-American.

“The whole world looks up to the U.S. as a perfect example of how to get it right.

“Election deals with human emotions and often times, America handles it with sportsmanship on Election Day you know the loser will concede and the winner will try to bring everybody together and build the country.

“But what we are seeing in the media about potential conflicts, and the clash between supporters of the rivals here in Manhattan. It is un-American.”

Mk Pathak, 75, said he had never witnessed a U.S. presidential election with “extreme divergence in the two major candidates” like this one.

Pathak, an entrepreneur and philanthropist of Indian descent, said Biden and Trump are fighting over nothing, as the issues remained the same.

“Before now in America during a Republican government, there was a democratic cabinet member, and vise versa, it was like that.

“This time it appears these two are poles apart, but whoever wins in the end will be interested in opening the economy while controlling the COVID-19 pandemic,” he said