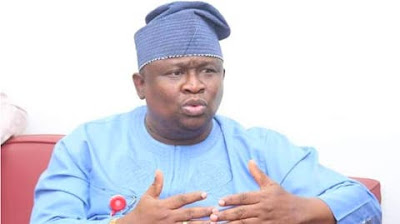 The Senator representing Lagos West Senatorial District, Solomon Adeola, said on Sunday that the massive destruction of property in Lagos State had justified the need to grant the state special status and grants.

He, therefore, urged well-meaning Nigerians and residents of Lagos to join him in the crusade.

Adeola stated this in a statement by his media aide, Kayode Odunaro, on Sunday, titled, ‘#EndSARS protest: Senator Adeola renews call for special status and grant for Lagos’.

The lawmaker, who is the Chairman, Senate Committee on Finance, according to the statement, was among the South West Senators briefed by Governor of Lagos State, Mr. Babajide Sanwo-Olu on the destruction of public and private properties across Lagos State last week.

He said over the years, many attempts had been made in the agitation for a special status for Lagos State on the basis of its being the nation’s economic nerve centre and its status as the former Federal Capital of Nigeria with many federal infrastructures and huge population of all tribes of Nigeria.

He added that the resources of the state government could not adequately cater for the population and the pressure on amenities arising from the status of the state as an acknowledged megacity with a population of over 20 million Nigerians.

He said, “The issue of special status for Lagos State has again been brought to the front burner following the fallouts of the protest against extra-judicial killings and Police brutality.

“With the magnitude of the destruction of critical infrastructures in Lagos State last week, it is inconceivable that Lagos Government alone can handle the rebuilding of destroyed properties, most of which are for public good.

“It is necessary at this time to state that when Federal Government makes interventions to assist the state like the N1bn per state to assist in efforts aimed at stemming COVID-19, Lagos State should be more favourably treated in view of its status.

“Nigerians boarding all the burns Bus Rapid Transport buses are not asked their state of origins when they board,” he stated.

While commending the Lagos State Governor,  for his “adroit and patriotic handling of the crisis within the power and resources available to him”, Adeola called for an urgent grant from the Federal Government to aid the state in rebuilding and replacing destroyed public facilities of all kinds during the attendant mayhem to the protest.

He said, “From what we saw during our sympathy and condolence visit to Lagos State Governor and its people, it was clear that Lagos State Government cannot handle the rebuilding of infrastructure and facilities destroyed alone.

“The destruction in Lagos State in all aspects expectedly dwarfed that of other states and FCT put together as a result of the crisis” he stated.

The Senator said such a grant from the Federal Government at this time following the regrettable mayhem was ultimately in national interest because Nigerians from all parts of the country resident and doing business in Lagos State, would benefit.

He also said many revenue generating agencies and other federal institutions are similarly located in Lagos State with the real possibility that their operations would be greatly impeded without urgent rebuilding and replacing some of the destroyed properties.