Drama in church as Gov. Wike calls out bishop over facemask 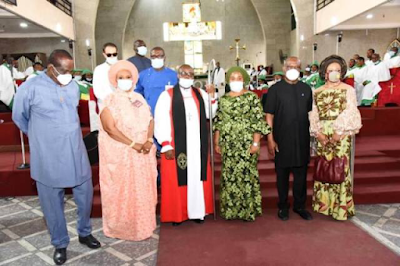 There was a mild drama at the Saint Thomas Anglican Church in Mile 2 Diobu, Port Harcourt Local Government Area on Sunday after Governor Nyesom Wike called out the Bishop of the Diocese of Niger Delta, Rt. Rev. Wisdom Ihunwo over disregard for COVID-19 protocols.

The Rivers State Governor frowned at the flagrant disobedience of COVID-19 protocol by some churches in the State, warning that if this continues, the State Government will have no option than to review the restriction on the number of people allowed to worship in churches.

He stated this during a special thanksgiving service organized by the family of Chief Azubuike Nmerukini in honour of his wife, Dame Oroma Nmerukini who survived a critical medical condition.

He warned that if it continues, the State Government will be compelled to revisit its position on the number of worshippers allowed per session of such church services.

“85 per cent of those who are here are not wearing facemask. That is the problems we have. Nobody wants to obey simple instruction.

“My lord Bishop, encourage our people to wear their face mask. It is very important. If this continues then I will go back and review the restriction to say it cannot be more than a particular number”, he said.

The Governor also expressed thanks to God for the healing of Dame Oroma Nmerukini who he described as a sister and mother.

Meanwhile, in his sermon, the Bishop of Diocese of Niger Delta admonished the congregation to discard the habit of bemoaning what they lack.

He, rather, urged them to believe fervently in God, pray to him and learn to live a life of thanksgiving.

Biohop Ihunwo asserted that when God touches any situation, it will change for good like the case of Dame Nmerukini who had received touch of healing from God.

Thanking God for the restoration of her health,  Dame Nmerukini said the experience was bitter but she is grateful to God who has healed her.

Dame Nmerukini also expressed thanks to friends and family members who offered prayers and other levels of support.

Chief Azubuike Nmerukini who is also the State Chairman of Local Government Service Commission thanked God for the healing of his wife. He also commended Governor Wike for both financial and moral support rendered to him and his family while his wife was ill.

He noted that God empowered some persons to offer assistance that made the burden on them easy to bear.