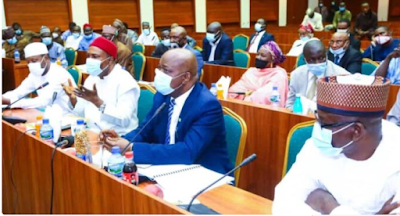 There was a mild drama on Monday when officials of the ministry of science and technology appeared before a house of representatives committee to defend the 2021 budget proposal.

Awaji-Inombek Abiante, a member of the house of representatives committee, had countered Ogbonnaya Onu, minister of science and technology, on the transparency of the selection process for the scholarship scheme of the ministry.

According to NAN, Onu explained that the scholarship scheme is to reward students in science and innovation, and the competition usually begins at the local government level.

He added that three students who emerged as the overall best in the science competition are awarded scholarships to doctorate level.

However, Abiante, lawmaker representing Adoni/Opobo/Nkoro federal constituency in Rivers, queried the selection process and told Onu to produce evidence to back his claim.

The lawmaker said such examinations had never been conducted in any of the local government areas of his constituency.

“You should have borrowed a leaf from Cowbell competition, sponsored by a dairy firm, where it is usually relayed live on television for the audience to watch and judge accordingly to ensure that such exercise is not done in secrecy. It should rather be made open to the public for the sake of transparency,” Abiante said.

Responding, Onu said the claim that the selection process was shrouded in secrecy was false.

“I am not somebody that will come here and say things that are not verifiable; we are determined to succeed.”

Onu’s attempt to explain further was cut short by Beni Lar, the committee chairman, who called for an executive session to address the issues raised on the selection process.