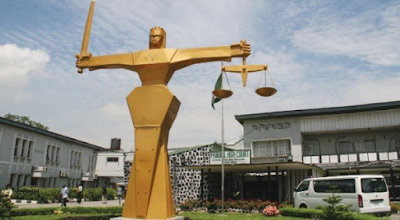 A Federal High Court in Lagos on Thursday imprisoned a couple for attempted human trafficking.

Justice Oluremi Oguntoyinbo ordered Peter Ademehintoye (37) and his wife Abosede (36) to remain in custody of the National Agency for the Prohibition of Trafficking in Persons (NAPTIP) pending determination of their bail applications on December 11.

The order followed claims that the Ademehintoye’s were involved in an attempt to traffic Miss Adetula Oluwatosin to Oman for forced labour.

Each defendant pleaded not guilty to the four-count charge pressed against them.

NAPTIP alleged that Ademehintoye, sometime in 2019, at Block 25, Ikosi Isheri Shopping Complex, Ketu, Lagos, ‘hired, transferred and transported Oluwatosin, for the purpose of using her for forced labour in Oman’.

Mrs. Ademehintoye, was alleged to have, on June 2, 2019, aided and abetted her husband to escape from NAPTIP’s custody at 165B, Oba Ladejobi Street, G.R.A, Ikeja (NAPTIP Lagos Command).

She was also alleged to have unlawfully assaulted a NAPTIP official, Mr. Olamide Foyinsola, while he was on official duty.

The offenses, according to the prosecutor, C. I. Ajeigbu, contravened Sections 24, 22(a), 28(1) and 32(2) of the Trafficking in Persons (Prohibition) Enforcement and Administration Act, 2015.