Chelsea vs Tottenham: Lampard stresses ‘respect’ for Mourinho ahead of clash 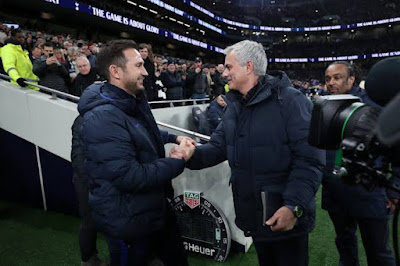 Chelsea boss Frank Lampard believes Jose Mourinho is as good a manager as he has ever been, insisting he respects his former boss despite recent spats.

Mourinho’s Tottenham are top of the Premier League ahead of this weekend’s fixtures, just two points clear of Chelsea.

The Portuguese has enjoyed huge success throughout his career but struggled towards the end of his spell at Manchester United and took time to find his feet at Spurs.

The two managers clashed on the touchline in their League Cup meeting in September and last year Mourinho suggested Lampard had used former Chelsea boss Antonio Conte’s tactics to beat Spurs in the league.

But Lampard, who won two Premier League titles under Mourinho at Stamford Bridge, played down the incidents and said the Portuguese were still a top manager.

“You don’t get a record as decorated as Jose Mourinho has as a manager without being a very talented coach,” he said on Friday.

“For all of us the game is so reactionary at the moment, particularly in the modern era, with social media reactions, that form will always be judged very harshly for any manager.”

Lampard, who is in his second season in charge at Chelsea, said he was not surprised by anything management threw at him.

“I’ve got respect for Jose as a manager and I think that’s just how it is,” he said. “I didn’t take any offense to the talk of Antonio Conte’s system or whatever.”

“Jose can have his opinions and it’s not a problem,” he added. “I’ve got respect for him and it’s nothing contentious for me.”

Sunday’s match will be the 1,000th game since Roman Abramovich became the owner of Chelsea, transforming the club from also-rans to serial trophy contenders.

“As a manager and as a player who was involved in a lot of those games I can give him a huge thank you because nothing that we have achieved in the Roman Abramovich era could have happened without him and his support,” said Lampard.

“Whether you’re talking about firstly the financial input but also the development of the training ground, the love and time put into the academy, and the trophies we’ve been able to win have all been made possible because of him.”