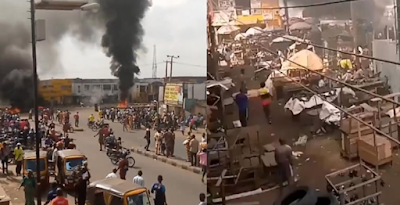 There was pandemonium at the Agodi Gate area of Ibadan following a clash between some motorcyclists and men of the Agodi Correctional Centre, Ibadan.

The cause of the fight, which started on Tuesday morning, could not be immediately ascertained but our correspondent gathered that two persons were allegedly shot by the prison warders.

Two mechanics who went to the motor spare market beside the prison told our correspondent that one of the victims was shot in the face.

One of them, who identified himself as Taye Odewale, said he was not sure if the victims are motorcyclists, traders, or passerby.

Another person selling drinks at the area, who confirmed the clash, said the youths in the area had made bonfires on the road to protest the alleged killings.

The Police Public Relations Officer in Oyo State, Mr Olugbenga Fadeyi, when contacted said policemen and other security agents had been deployed in the area to prevent hoodlums from seizing the opportunity of the clash to attack the prison.

The PPRO said, “Contrary to the currently trending news online, that policemen fired shots leading to injury at Agodi gate area this morning.

“The truth is that there was a clash between officers of the correctional service and bike men stationed at Agodi Gate.

“Upon receipt of this information, policemen, as well as other security agencies, moved to the scene to ensure there is no break down of law and order that could lead to a coordinated attack on the prison facility.”