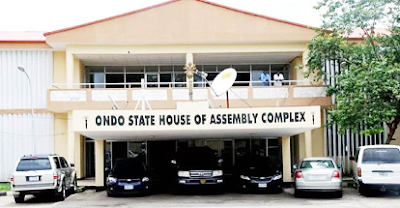 The Deputy Speaker of the Ondo State House of Assembly, Ogundeji Iroju, has been impeached.

The motion for the removal of Iroju was moved by Tomide Akinrogunde following a parliamentary resolution where the former Deputy Speaker was alleged of gross misconduct which the lawmakers said was inimical to the progress of the Assembly.

The resolution was said to have been signed by 20 lawmakers which was said to be in line with the Standing Order of the Assembly.

Aderoboye who was the Deputy Speaker of the House during the fourth Assembly in his acceptance speech pledged to work with other stakeholders.

Meanwhile, a panel to investigate allegation of gross misconduct against Iroju has been inaugurated.

Iroju was among the four suspended lawmakers who were reinstated by the Court of Appeal on November 18 but were prevented from gaining entrance into the Assembly despite the court order.

On July 8, 2020, Iroju and two suspended lawmakers (Hon. Wale Williams and Hon. Favour Tomomewo, Hon. Tomide Akinribido) were suspended indefinitely by the leadership of the Assembly over what was described as unparliamentary acts.

The lawmakers who are loyal to the embattled Deputy Governor of the State, Hon. Agboola Ajayi were among the nine lawmakers who refused to sign the impeachment notice against Ajayi who defected from the All Progressives Congress, APC.

Reacting to his removal, Iroju described it as the height of Illegality which will not stand.

According to Iroju, the 20 lawmakers needed of the 26 was not met, hence the entire process was a ruse.