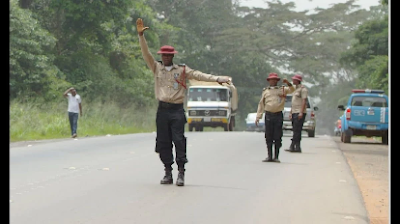 Nigerians have kicked against the call by the House of Representatives that the Federal Road Safety Corps (FRSC) personnel should carry guns.

The Committee on FRSC made the demand on Thursday in Abuja.

They spoke when FRSC Corps Marshal, Boboye Oyeyemi appeared for the 2020 budget performance and 2021 budget defence.

The lawmakers noted that firearms will help the personnel curtail the excesses of road users.

Committee Chairman, Akinfolarin Mayowa, explained that the 1992 Act of FRSC allowed the corps to bear arms.

Mayowa added that the implementation was urgently required to ensure laws were obeyed and to allow the officers function effectively.

But citizens have opposed the idea. They warned that allowing more paramilitary arms access to weapons might cause problems.

In mockery of authorities, some respondents said other traffic agencies like Lagos State Traffic Management Authority (LASTMA) and Vehicle Inspection Office (VIO) should also get the nod to move about with rifles and pistols.

Some gathered reactions below:

@foluOgunseye: God! When will this brainlessness end? Guns to enforce traffic offenses? What! Instead of ensuring every vehicle is duly registered, then all you need do is pick an offenders plate number, you prefer that they shoot! And @femigbaja leads this house???

@Dgeniusacademy: They want to increase the number of armed men. So that they can have enough of them in case the masses want to rise up. Why is everything happening at the same time, shortly after #EndSARS protest.

@Timzybone: They’ve been doing their jobs quite well without arms, giving them arms will lead to impunity. More Police officers with guns die than Road Safety officers without guns let that sink in.

@onyoko: They are already creating another SARS. What should they be doing with the guns? Even in some African countries, the Road Safety Agencies make use of technology to capture offenders for appropriate punishment. There isn’t any sign post for speed limit in the country to start with.

@Psalmopet: See this people have been a little bit in order because they don’t carry guns, giving them guns will turn them to another uniform criminal.

@JanariusS: Thank God I got my driver’s license last week. I can’t take the risk of being wasted because of license.